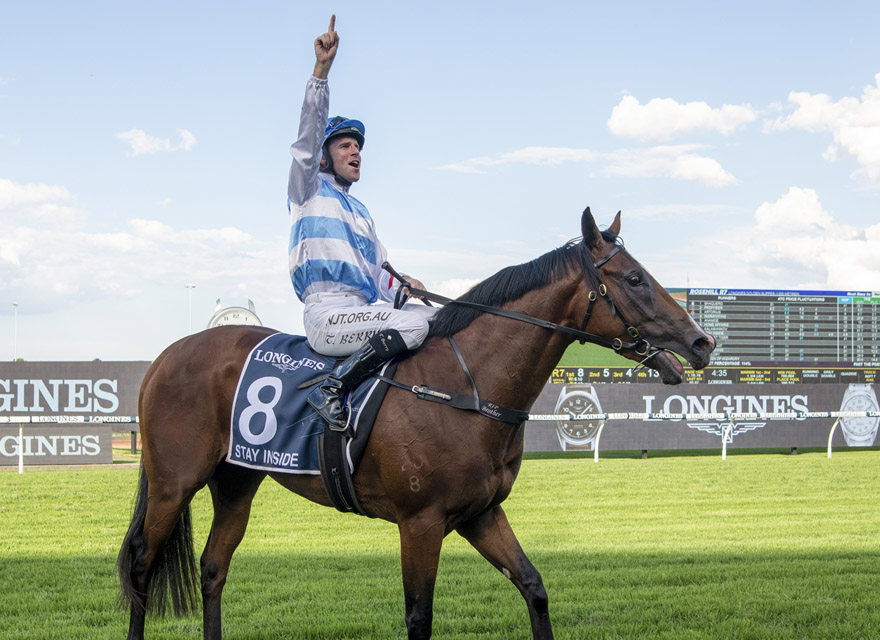 Still number one? - Stay Inside was too good in the Golden Slipper and resumes today ahead of a tilt at the three-year-old Group Ones

The Sydney spring carnival rolls on and so does the quest towards the Group One Golden Rose with the running of the San Domenico stakes over 1,100 metres and the Ming Dynasty over 1,400 metres.

So which three-year are the ones to watch heading towards the Golden Rose? The Race Guide analyst Adrian Sciglitano has a close look at the main contenders.

THE CHAMP STAY INSIDE

While some recent Golden Slipper winners haven’t been able to emulate their two- year old form to their three- year old year, Stay Inside just looks different given he has such a professional attitude and does it all in his stride. The son of Extreme Choice was the star of the show throughout his first racing campaign winning three out of his four career starts with an unlucky 4th behind Anamoe in the Todman his only blemish.  A neat and compact type in the yard, it will be interesting to measure his development and progression between preparations. His two recent trials suggest he is ready for a forward showing in Saturdays race.

The Rosebud winner Paulele steps out again in what will be the next stage of his quest to the Golden Rose. The son of Dawn Approach (IRE) was sharp in the mounting yard first-up showing that he has come back a much more furnished galloper this preparation, reflective of his dominant 2.4 length win over raceday rivals Remarque, Maotai, In the Congo and Mazu. His best win prior to that victory came on a soft 7 at Randwick in the Kindergarten Stakes suggesting we could see an even better three-year old on Saturday. I think he wins again today and stamps himself as a leading contender for the Golden Rose.

Looking away from the San Domenico, the Ming Dynasty over 1,400 metres could unearth a Group One wild card for the Waller yard. An ex-Hayes galloper, Yulong Turbo won impressively on debut before fighting on well to the line in a high class Blue Diamond prelude. He's a strapping colt in the yard with plenty of size and strength and the new stable has brought him along patiently with three trials and plenty of work on the track. I'm expecting a big run today and some action in the futures markets after the result.