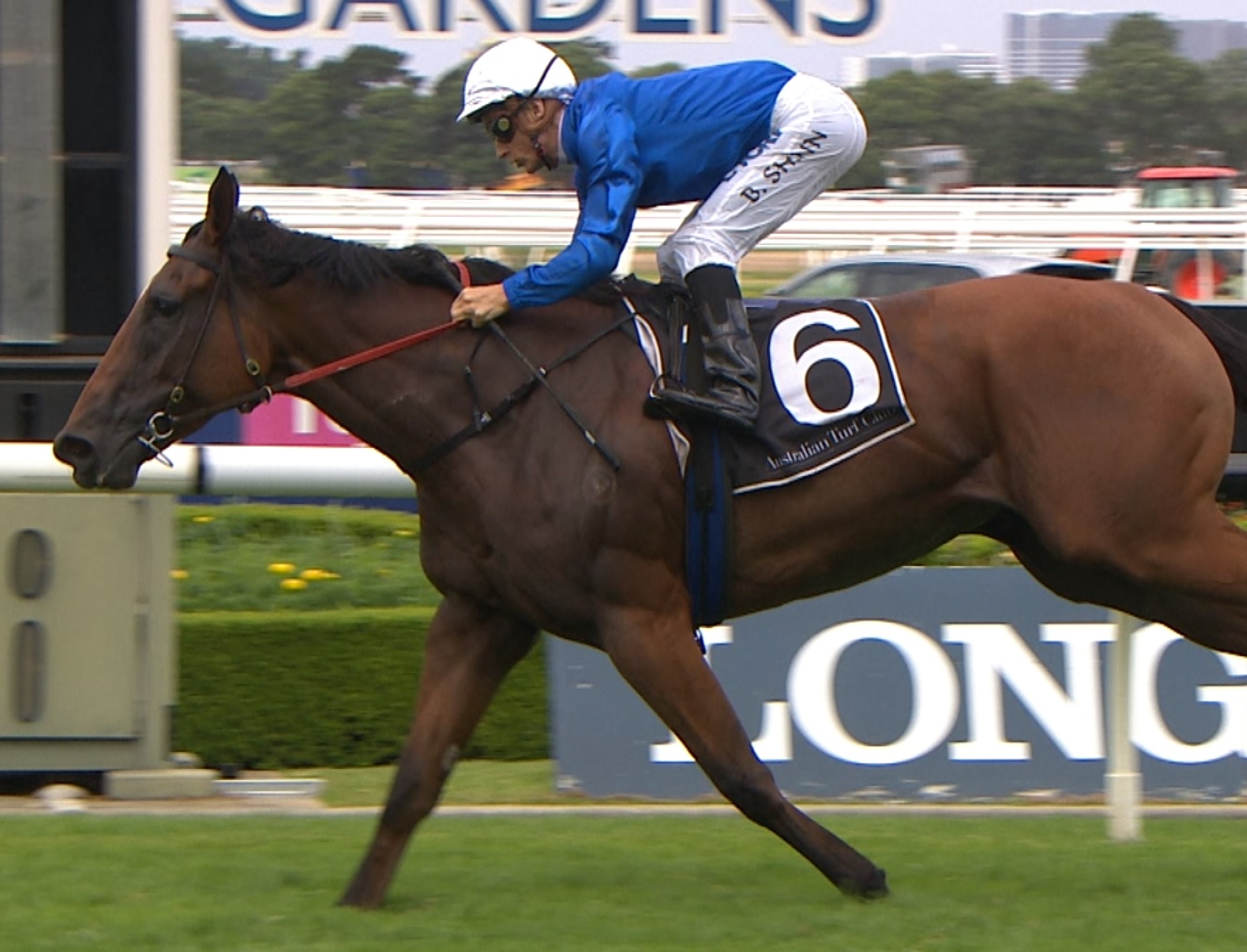 She's big, she's strong, she's beautiful and she's quickly proving herself to be one of the best gallopers in the land.

ALIZEE had beaten the mares at Group One level last Autumn before taking a long eight-month break, forced out of the Spring after bleeding. Despite the setback, it seems that extra time away from the track was just what the hulking daughter of Sepoy needed to fully mature. She looks set for even greater heights over the next few months after an effortless win today at Rosehill Gardens.

It was a patient ride off a STEADY tempo from Blake Shinn, simply steering her to the outside and unleashing a rapid sprint to dash straight past a floundering TRAPEZE ARTIST and LE ROMAIN, who was brave chasing into 2nd over the final 200 metres.

In other races, VEGADAZE continued the unbeaten start to his career, making it three wins in a row in Race 4, while Waller's promising mare GIRL TUESDAY was extremely disappointing in Race 7 after being the subject of a huge betting plunge. Stablemate SEAWAY ended up surging clear for an easy win after drifting in the market.

#9 RISE UP THIS AUTUMN HANDICAP

MAPMAKER went to the lead and set a STRONG tempo, giving THY KINGDOM COME a nice trail behind. EXCELSIOR stuck wide no cover losing ground.

THY KINGDOM COME (1st) moved through and fought on best to beat home MAPMAKER (2nd 2L) and NICOCHET (3rd 2.5L) chasing up the inside to edge out LOOKS LIKE ELVIS (4th 2.6L).

THY KINGDOM COME doesn't have a great record at Rosehill, the rain helping make the track more to his liking and James Mac gave him a peach. MAPMAKER going well. KING VIV (7th 4.5L) and SUPER STAR BOB (8th 4.6L) OK after getting way back. KOOL VINNIE lame again.

DOTHRAKI led a a SLOW tempo, TRAPEZE ARTIST on his outside and ALIZEE out the back.

ALIZEE (1st) powered straight past to beat LE ROMAIN (2nd 2L) who hit the line well after being held up slightly. DOTHRAKI (3rd 2.4L) held on for a place.

Very poor from TRAPEZE ARTIST (4th 2.9L), who was badly out-sprinted off the SLOW tempo on a SOFT track, although he had shown signs of those weaknesses before (something our analysts missed in the preview). ALIZEE on the other hand has masses of power to produce a huge sprint, reeling off a 10.81 and 11.31 to dominate here, better than ever this prep. LE ROMAIN very solid as always.

LOVE SHACK BABY took up the running at a STEADY tempo (on the fair side). SWEET DEAL on her outside. GIRL TUESDAY got back.

Chris Waller's SEAWAY has come back gelded and is clearly on the way up still, a dominant win fresh. As for stable-mate GIRL TUESDAY (8th 6.2L) the jury is out after a massive plunge brought her in to $2.15 favourite. She did come wide on the track, perhaps didn't like the wet track and steady tempo, but her last 200m was only plain. HERE TO THERE (7th 6L) up from Melbourne didn't seem to handle the turn and stuck on OK midfield.

Race 9 RISE UP THIS AUTUMN HANDICAP

The Royal gets a red carpet run

ALL OVER BOSANOVA took up the running, getting a cheap section early then kicking home for a LONG SPRINT home (overall FAIR TEMPO: LONG SPRINT). ALL TOO ROYAL got the nice trail behind the leader, GHOSTLY stuck out wide no cover. PARET and PERFORMER got right back with JORDA.

ALL TOO ROYAL (1st) ran down the leader ALL OVER BOSANOVA (3rd 0.3L) who was brave, MAXMIMUS (2nd 0.1L) charging home up the inside late.

A tough effort from ALL OVER BOSANOVA, which was much better than her first-up run, she ended up giving the perfect trail to $4 fav ALL TOO ROYAL. MAXIMUS and PERFORMER (4th 1.4L) both strong first-up runs. PARET (5th 1.5L) too far back too. AYLMERTON (10th 8.6L) probably did't handle the wet and MILESAIN (11th 26L) pulled up with cardiac issues. 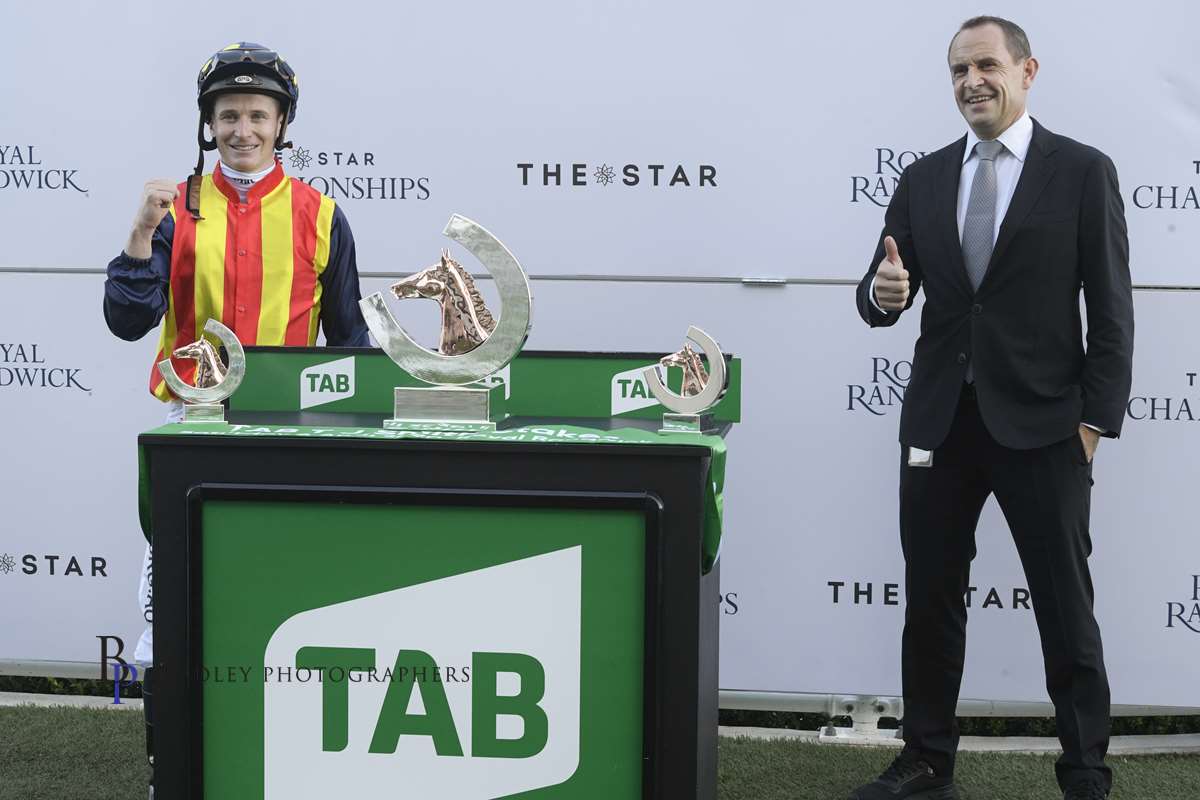 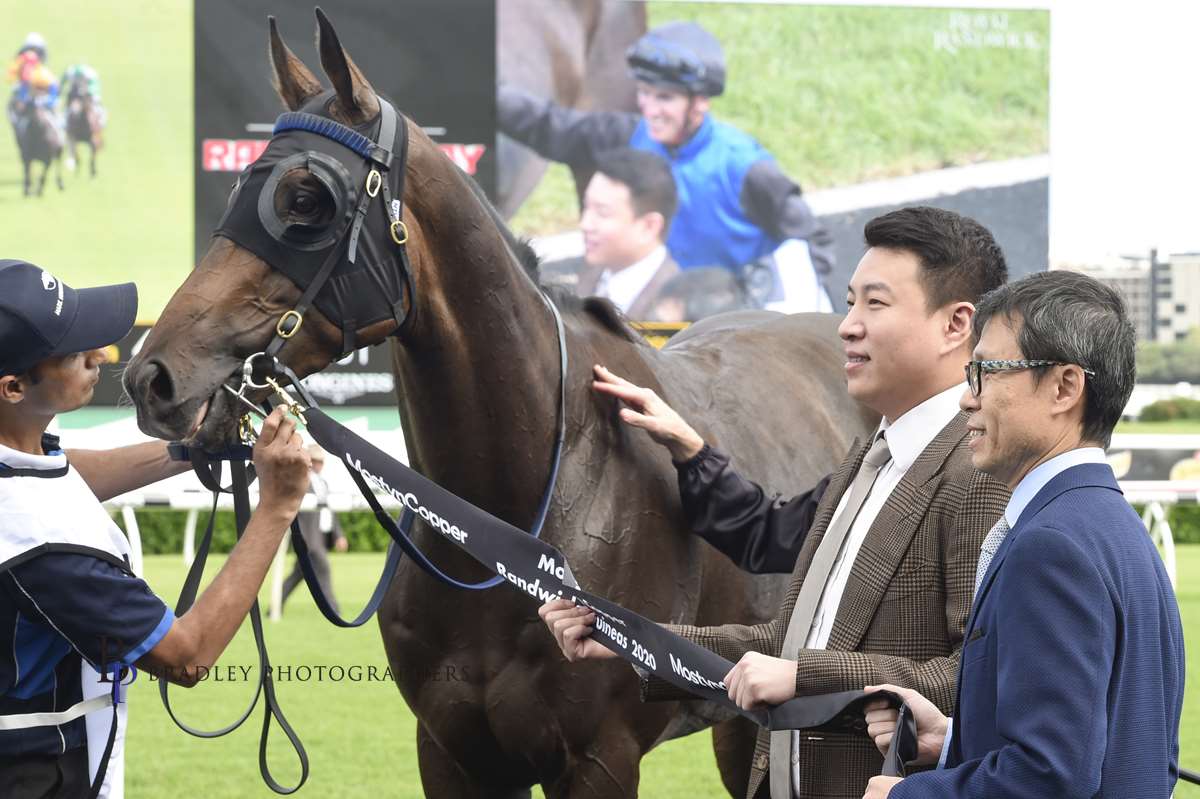 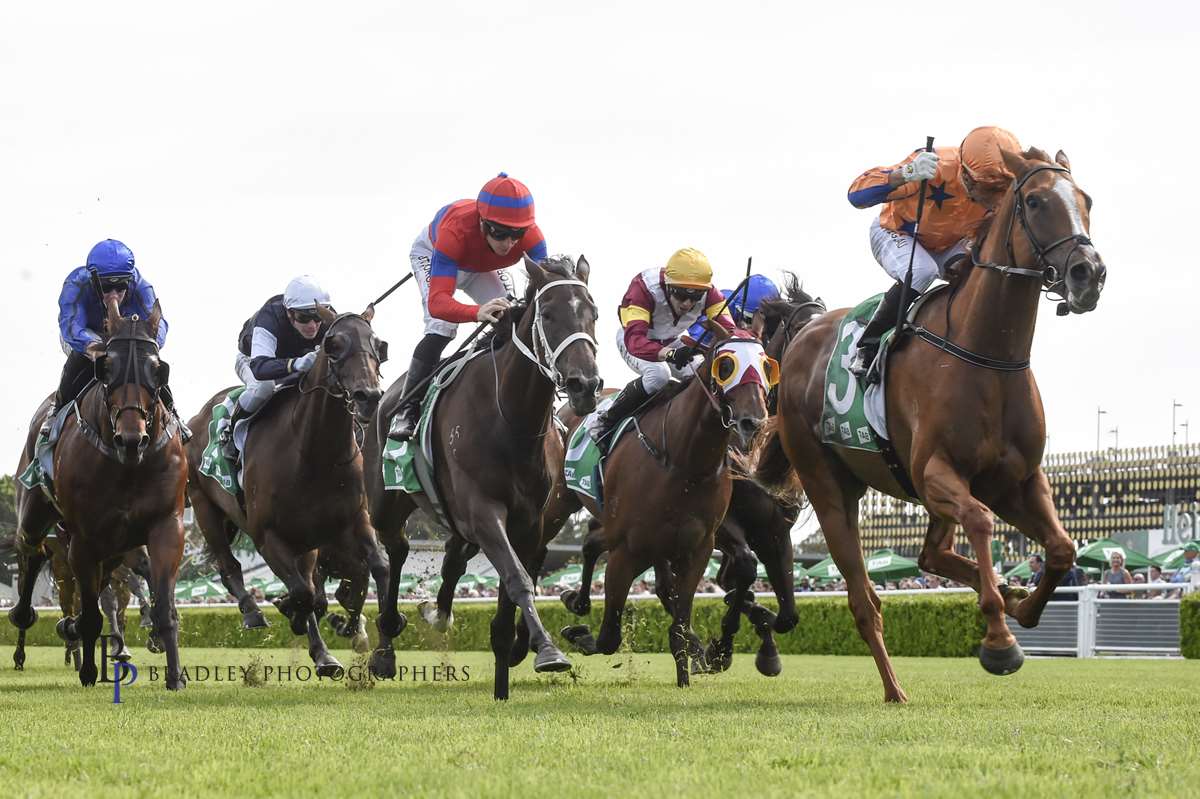 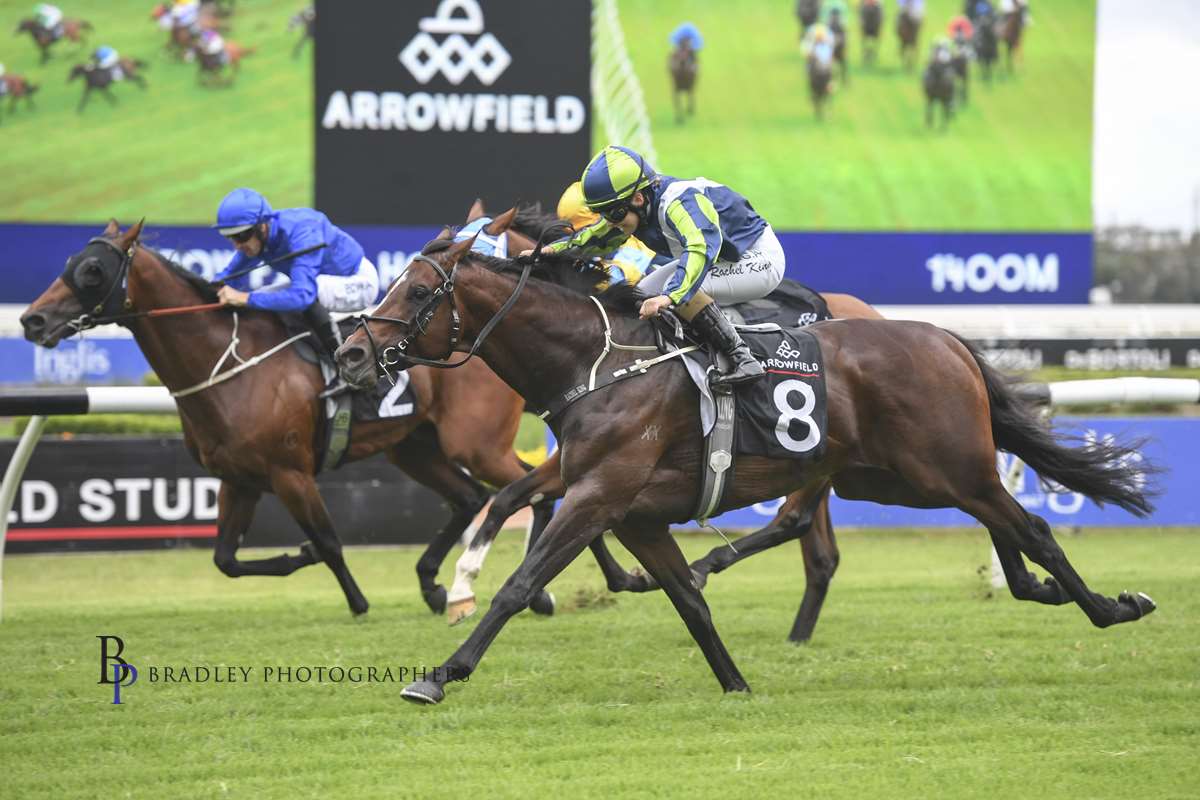 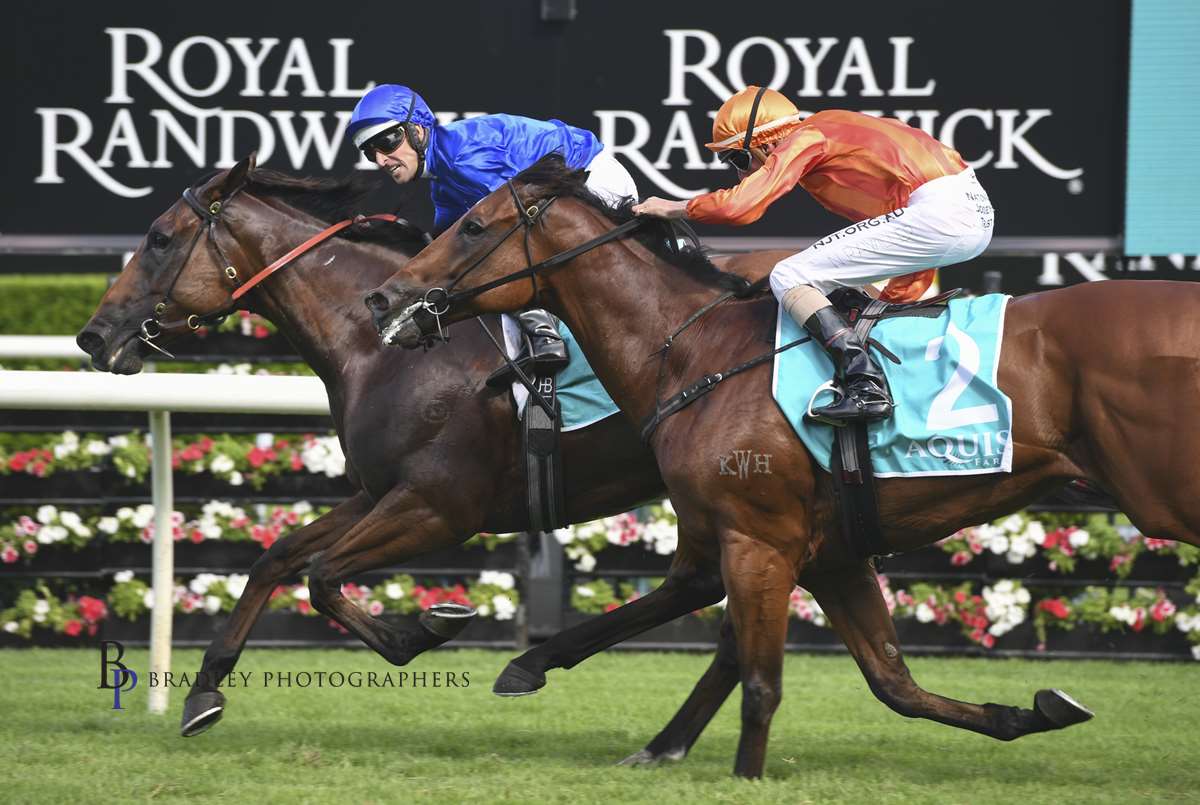